Mint chip ice cream is layered on fudge brownies, then topped with a layer of chocolate, whipped cream and mini chocolate chips... this is the PERFECT summer dessert!

Brownie Layer-
Line a 9"x13" pan with parchment paper.
Prepare brownies according to package, then spread batter into pan.
Bake 20-25 minutes, or until a toothpick inserted in the center comes out with a few moist crumbs, but no wet batter.
Cool Brownies.

Ice Cream Layer-
Allow a carton of ice cream to sit out at room temperature about 20 minutes, until soft enough to spread over the cooled brownies.
Once the ice cream has been evenly spread, place the entire pan in the freezer to allow the ice cream to re-freeze.

Chocolate Layer-
Heat the cream in the microwave for 1-2 minutes until hot (watch it so it does not boil). Add chocolate chips to the hot cream and set aside (undisturbed) about 3 minutes to allow the chocolate to melt. After 3 minutes, stir the chocolate until the cream and chocolate are fully combined.
Set aside and allow to cool to about room temperature.
Once cool, pour the chocolate over the ice cream layer, and spread evenly.
-OR- Heat a jar of good quality hot fudge until just warm enough to spread, and spread on top of frozen ice cream layer.
Return pan to freezer.

Garnish the whipped cream layer with toppings of your choice. I used a bit of everything I had on hand... a few chopped Andes Mints, mini chocolate chips and chocolate pearls.

Return pan to freezer and FREEZE AT LEAST 3 HOURS before serving.

The entire dessert can be made ahead, and kept in the freezer (covered) up to 3 days in advance.

Although the recipe will be made in a 9"x13" pan, I recommend using a boxed brownie mix (or brownie recipe) designed for a 9"x9" pan so the brownie layer is nice and thin.

Of course feel free to make the brownie layer using a from-scratch recipe if you like.

As much as I love real whipped cream, I usually use Cool Whip (or similar) for this dessert. The smooth texture works well with frozen desserts. If you are not a big fan of Cool Whip, I often use whipped topping from called Tru Whip that I have found at Whole Foods. 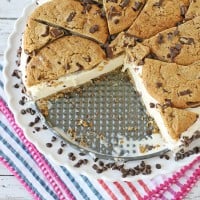 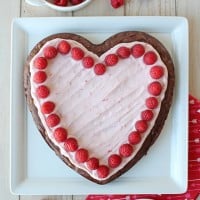 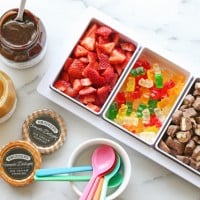